From the Editors of Family Circle

Group these eight exercises into mini circuits of three or four moves, and do three sets of 12 to 15 reps, with 30 seconds of rest with each set. 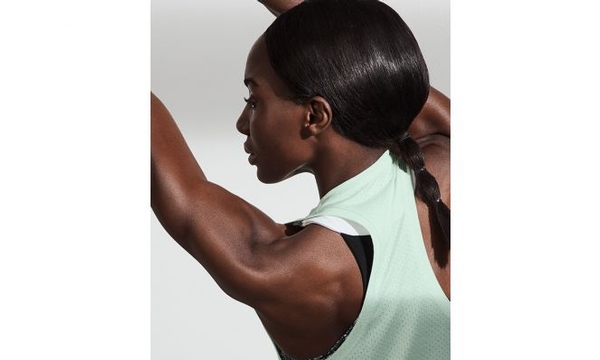 You already have the grit to plow through the work on your desk plus your to-do list at home and maintain a straight face and (mostly) even keel despite your kids’ nonsense du jour. Now put some muscle behind it, with a fast, on-point workout—and smart meals that refuel you. “Women can get major benefits from lifting weights, especially as we get a little older,” says Keisha Villarson, a trainer at Chelsea Piers Fitness in Brooklyn, NY, who created this eight-move, big-results circuit. So go hoist something heavy—then revel in feeling badass.

These two-part exercises work different muscle groups—giving you bang for your buck. 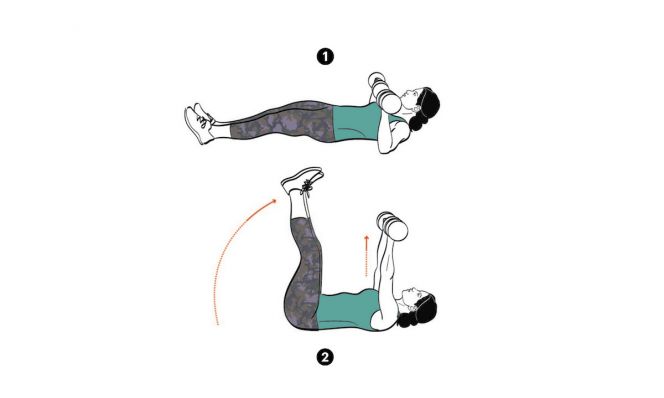 A. Lie flat on the floor, face up, with legs extended and arms straight in a T position. Bend elbows 90 degrees and hold weights directly above chest.
B. Straighten arms upward above chest. As you extend arms, hinge at the hips to lift straight legs directly up. Lower back to start. 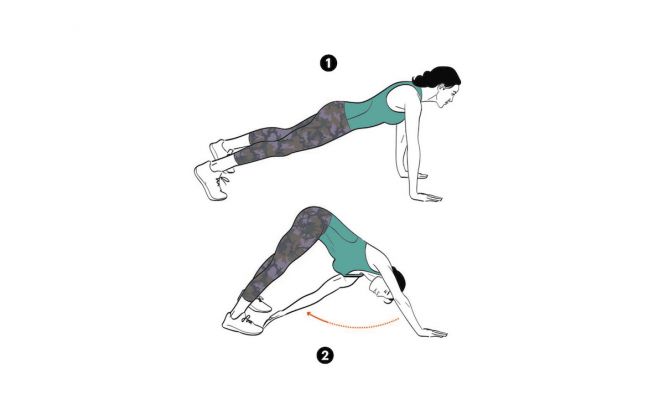 A. Begin in plank position, legs extended, arms straight and palms just wider than shoulders, forming a straight line from head to heels.
B. Lift hips toward ceiling to form an inverted V. As you come up, keep your right hand on the floor and reach your left hand to your right foot. Alternate sides. 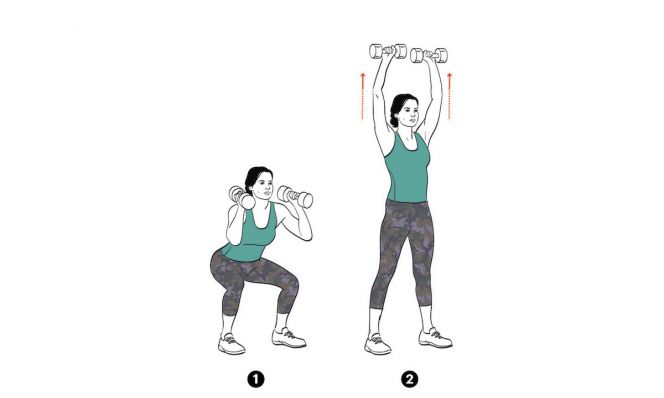 A. Stand holding weights resting on top of shoulders with elbows bent in front of torso. Keeping weights in place, squat down with knees aligned over ankles as you push glutes behind you.
B. Powerfully push to standing position while extending arms above shoulders. Hold for a count and lower weight to shoulders as you return to a squat. 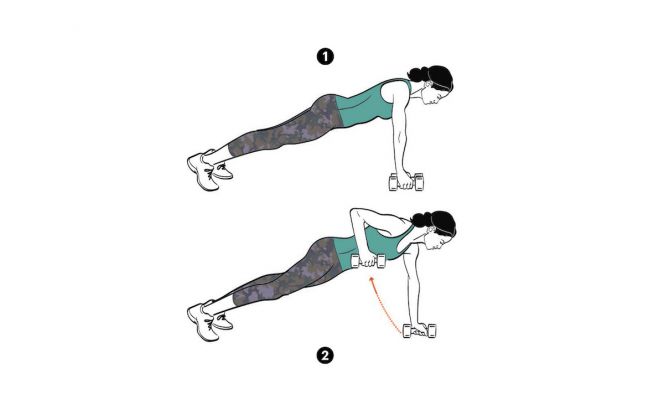 A. Begin in full plank position, holding weights on floor directly under shoulders. Step feet wider than hips for added stability.
B. Keeping head in line with spine and hips, and shoulders squared toward the floor, draw right hand toward right side of ribs; lower back to floor. Alternate sides. 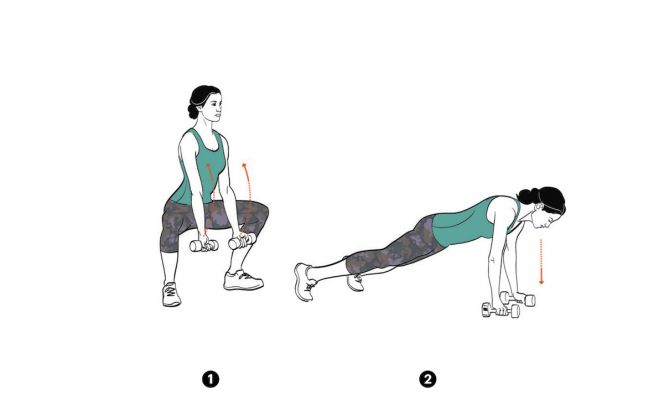 Biceps curl to half burpee

A. Begin in a deep squat with your toes slightly turned out and your hands holding weights inside your thighs. Do a biceps curl and then lower weights to floor just inside feet. While still gripping weights, walk or jump legs straight behind you and do a push-up.
B. Step or jump your legs back toward hands to return to starting position. 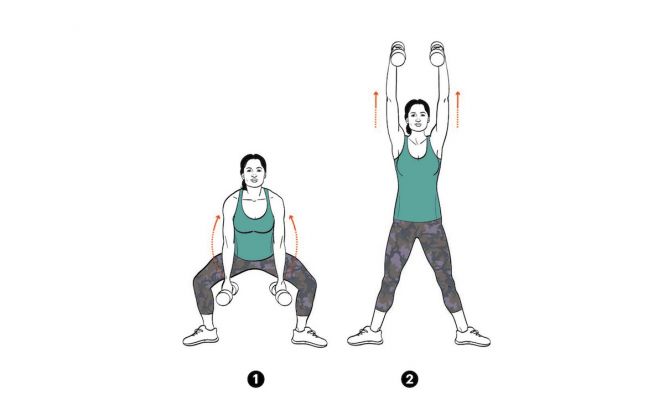 A. Stand with feet wide apart and toes pointing out slightly. Hold weights between thighs with palms facing in. Squat down, keeping knees aligned over toes and torso centered.
B. Stand up, curling weights to shoulders, then extend arms to press weights overhead. Squat down again, lowering weights toward floor.

Congrats (kinda!) on that dull ache you feel after a workout. OK, so you have to put your hand down on the toilet seat just to lower yourself onto the pot, but it is a legit sign you’re getting stronger.

To reduce soreness, try taking a hot bath with a couple of scoops of Epsom salts (which will reduce inflammation), and make sure to drink plenty of water and avoid alcohol, says Dan Roberts, CSCS, a trainer based in London, England. Deep-tissue massage—even just using a foam roller for a few minutes—can also help. And avoid stressing those same muscle groups two days in a row. “Going for a long bike ride and then walking up a lot of stairs the day after will definitely prolong the soreness,” Roberts says. 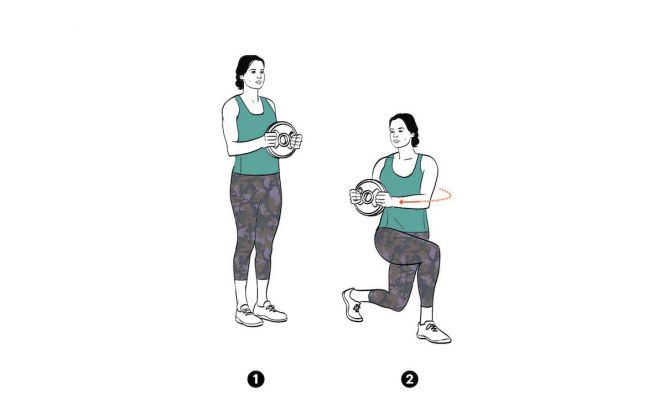 A. Stand with feet hip-distance apart, hands holding a weight in front of torso. Step left foot back into a lunge, keeping right knee over right ankle.
B. While stepping, twist torso and bring weight to the outside of right hip. Stand up and twist back to center. Alternate sides. 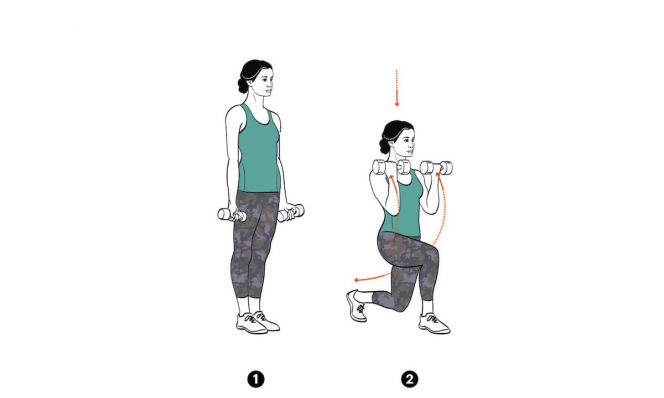 A. Stand with feet hip-distance apart and hold weights with arms at sides. Step left foot back into a lunge, keeping right knee over right ankle. Your head, shoulders and hips should all be straight up.
B. As you bend knees, curl weights toward shoulders, keeping elbows close to body. Stand up and step feet together, straightening arms down to sides. Alternate sides.

Running in place, lift knees to hip height or as high as you can go.

Standing with feet together, cross right foot behind left and touch floor with right hand. Moving quickly and explosively, repeat on opposite side. Continue, alternating sides.

From plank position, alternate bringing knees toward your chest.

From a squat, jump to standing. Reverse, jumping and landing in a squat.

Push up from knees or extended-leg position.