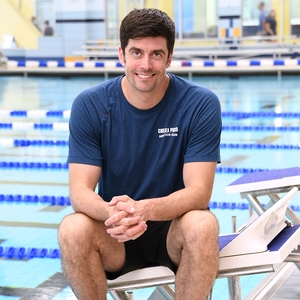 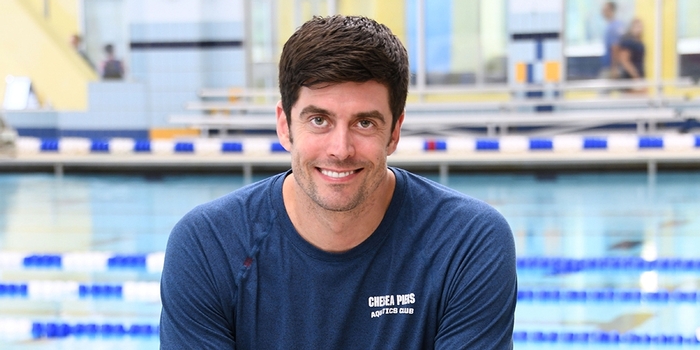 Jamie Barone’s career journey started as a toddler, when his mother insisted he could swim independently by age two. The intervening years, however, took unexpected twists and turns that included a fascination with hockey, a bizarre college recruiting experience, training with a highly regarded national coach and the most decorated Olympian of all time, rapid ascent to the national stage, a stint selling women’s designer gowns and, finally, into the world of coaching.

The goal? Well, there was no real goal. Jamie’s career path can best be described as seat-of-the-pants decision-making. It was like getting the keys to the car for a long drive with no clear destination. There was no GPS, no seat belt and no precise or logical pattern. “Where do we turn now?” Jamie’s conscious continually asked him. “I don’t know. Let’s try a left and see where it takes us. How about now? Let’s try this way.” Barone trusted the process, even if it seemed fragmented and flawed.

The only things directing Barone were faith that things would work, family that supported him and his determination to squeeze out every last ounce of ability he had in him to see how far he could reach as a swimmer. When his competitive career ended, he started coaching, but it hardly seemed like his life calling, and like his path as a competitor, evolved oddly. When he was offered the job at CPC, he had no head coaching experience and was suddenly entrusted with a program with unimaginable resources. He had just one thought: Don’t screw it up..

Barone took to water early, and his family joined the Darien YMCA shortly after moving from New Jersey in 1990. He played a lot of sports as a youngster but quit swimming as a teenager because his joints constantly ached. In high school, he played ice hockey at Fairfield Prep for his first two years.

“That didn’t exactly work out,” Jamie remembers of his hockey years. “I didn’t make the team in my junior year, and I ended up playing for other teams as a final hurrah. It was time to hang up my skates.”

He joined the Prep swim team as a senior and helped the team win its first State Open championship. He had successes, but, perhaps more important, he was finally pain-free. “The doctors said when you’re done growing, your knees will stop bothering you. I built up all my muscles in skating,” Barone explains.

He planned to attend postgraduate school, but the offer fell through when the coach moved on in June. Scrambling to find a college option just a few weeks before the start of the fall term, Barone enrolled at Loyola University Maryland, one of three schools that had shown previous interest. He saw the campus for the first time on move-in day. “I was just having fun,” he says, “but I was getting better each year.”

Although he arrived to the college program unheralded, Barone quickly made a splash with the Greyhounds. He served as three-time captain, set school records, earned Metro Atlantic Athletic Conference Swimmer of the Year honors and ultimately won six conference championships. The school standards he set at Loyola lasted for up to eight years.

“Jamie had a passion for wanting to achieve greatness,” says Brian Loeffler, who coached Barone at Loyola University and still runs the program. “He befriended a young Michael Phelps and Kevin Clements and wanted to train with them in hopes to make NCAA and the Olympic team.”

While at Loyola, Barone joined the North Baltimore Aquatic Club to train under Coach Bob Bowman. Barone’s teammates included Phelps, then a teenage prodigy with Olympic aspirations. Barone said he was “humiliated on a daily basis, and fourteen-year-old girls were wiping me off the floor every day.” But he also had a “front-row seat for the development of Michael Phelps,” and the two became friends and roommates.

“He was like a brother to me,” says Phelps, who famously went on to win twenty-eight Olympic medals, twenty-three of them gold. “When we were putting that much time into something, we got close. He was more than a friend and a training buddy. We were hanging out all the time.”

While training with Phelps and others of his ilk was humbling for Barone, he blossomed under the grueling demands of Bowman, who is now the swim coach at Arizona State University and coached four U.S. Olympic teams.

“I knew when he first came and met with me that he was really hungry and willing to do whatever he could to be the best swimmer he could be,” Bowman says. “He took on challenges head on and didn’t settle for less than the best he could give.”

Barone’s development as a swimmer, how- ever, continued unabated. There were times when he felt misplaced in the deep end of the worldwide swimming pool. In his first race against world-class swimmers in 2003, he was disqualified for making an illegal turn. “I felt like a lost puppy. I had some real cognitive dissonance going on. I struggled to believe I belonged in that crowd, despite showing the ability to compete with them,” says Barone.

“He never shared it with me, but you could tell there was a lot of frustration,” Phelps says. “He was really trying to play catch up. That was difficult for him. It was pretty challenging, but he got through it.”

Bowman continued to get the best out of this conflicted athlete. In 2004 he qualified for the Olympic trials in the 100-meter breaststroke and finished twelfth. After a two-year break, Barone resumed training and qualified for the trials again in 2008. While falling short of making the Olympics, Barone proved he belonged on the worldwide swim stage. “Jamie is one of the latest bloomers that I have coached,” Bowman says. “It’s a real tribute to him that he kept pushing his limits to reach the top levels of the sport.”

Competing at various levels taught Barone valuable lessons about the sport. He saw Michael Phelps’ outrageous work ethic. He witnessed Bowman’s fanatical attention to detail. He saw Loeffler’s low-key approach, and how athletes frequently performed better under less physical and mental stress. Each experience was different, but also noteworthy. “I was young enough to keep my mouth closed, but my ears open,” he says.

After the 2004 Olympic trials, Barone worked with Bowman in Michigan and helped Loeffler at Loyola as he tried to identify his career path. “Jamie had a great eye for stroke mechanics,” Loeffler says. “He can quickly breakdown someone’s stroke and make a suggestion to improve it.”

He also spent time in New York, where he trained with the New York Athletic Club. To make financial ends meet, he sold designer evening wear for women. Friends encouraged him to make another try at the Olympic trials, and while he succeeded, he also discovered the value of low-intensity training.

“I ended up swimming faster trials than in 2004,” Barone says. “I was swimming as fast or faster than in heavy training. There was no pressure. It was fun.”

When Barone elected to end his competitive career after the trials, he gave swim lessons to children in Greenwich. “It eventually got so big,” he says, “that I didn’t have to sell dresses anymore.” He returned to Baltimore and became more interested in helping young swimmers. “I got this rush, this feeling that I was able to help swimmers. My worst day on the pool deck was better than my best day making cold calls.”

A swimmer who worked with Barone in Connecticut called him in 2010, informing him of Chelsea Piers’ plan to launch in Connecticut. He passed Barone’s information along to David Tewksbury, the business founder. After several conservations, Tewksbury handed over the keys to the swim program at the yet-to-be-built facility.

“I was handed a blank slate,” Barone says of the life-changing moment. “I had no real management experience, had never been a head coach. I had all these ideas of what I wanted to do. The main thing I wanted was to produce high-level results while still allowing for some semblance of normalcy outside of the pool.”

All of Barone’s life experiences fell into place. Discovering, learning, selling, teaching and believing combined into one beautiful package for Barone at Chelsea Piers. When his swimming journey began more than three decades ago, no one could have foreseen that it would have ended up here, just a few miles from where he spent most of his youth, training the swimmers of tomorrow. There was no plan, no destination, no dream job—just perseverance and trust that his work eventually would be rewarded.

Perhaps the most important lesson Barone learned during his unique journey is to treat his charges as individuals. There is no one-size- fits-all coaching style for swimmers. As his own path revealed, young athletes evolve at their own pace. Sometimes that process requires time to play out.

“If the only thing in your toolbox is a hammer, then every kid is a nail,” Barone says. “Not every kid has the same background, the same fire. I tell them that swimming should be something that enhances your journey, not something that adds stress. I want them to swim and have fun doing it, and we’ll do whatever is necessary to make it work.”

Coaching teenage athletes is a challenging assignment. There are emotional roller-coasters, but add in academics, relationships, employment, college recruiting and social events, and it’s easy to see how stress can become unmanageable for athletes and coaches. It’s like a game of dominoes in which one piece teeters just a bit too far, and the entire chain collapses.

Jamie Barone strives to keep his swimmers in balance at Chelsea Piers Connecticut and has found a formula that works. In December, nine swimmers announced plans to continue their careers in college. He expects commitment and dedication, but he also realizes his athletes have myriad other responsibilities.

“That was one of the things I really liked,’’ says swimmer Elizabeth Boeckman, who will attend Princeton University. “He let us be teenagers. Every practice is hard and difficult and challenging—he’s always giving technique advice—but he also makes sure we get the all-around high school experience.”

Barone’s methodology is an anomaly. In a day and age when most coaches require swimmers to swim for the sake of swimming—“garbage yardage,” Boeckman terms it—Barone pulls back the reins. He understands swimming is just a part of the equation and that physical and emotional stress impact performance.

“Awards are nice, but I think the validation is passed on by the fact that kids seem to want to be here,’’ Barone says. “When we see kids who are healthy and happy, that’s the validation. It’s not easy to maintain that level of success. But if we have healthy, happy athletes who leave the program better than when they started, that’s all the validation I need.” 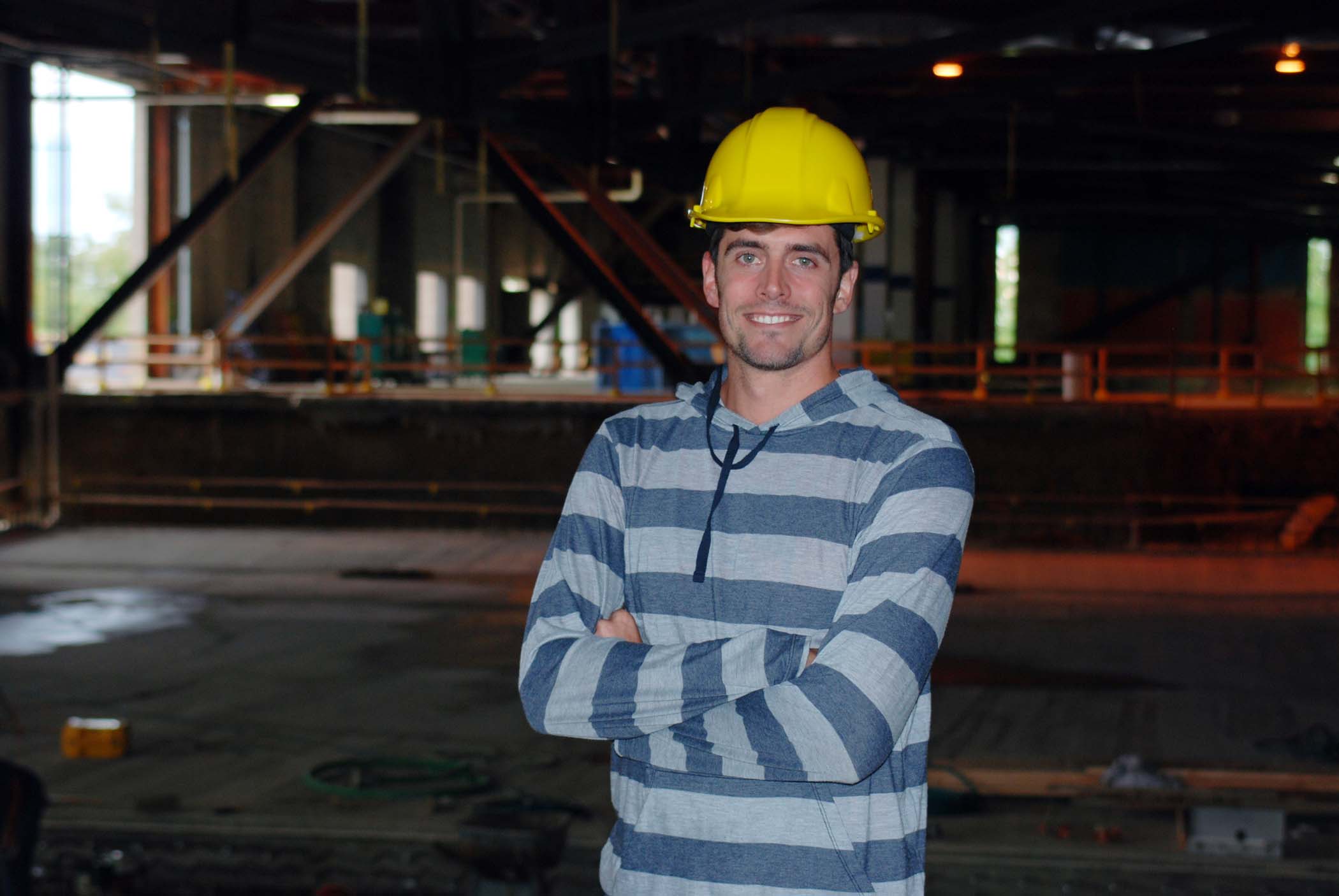 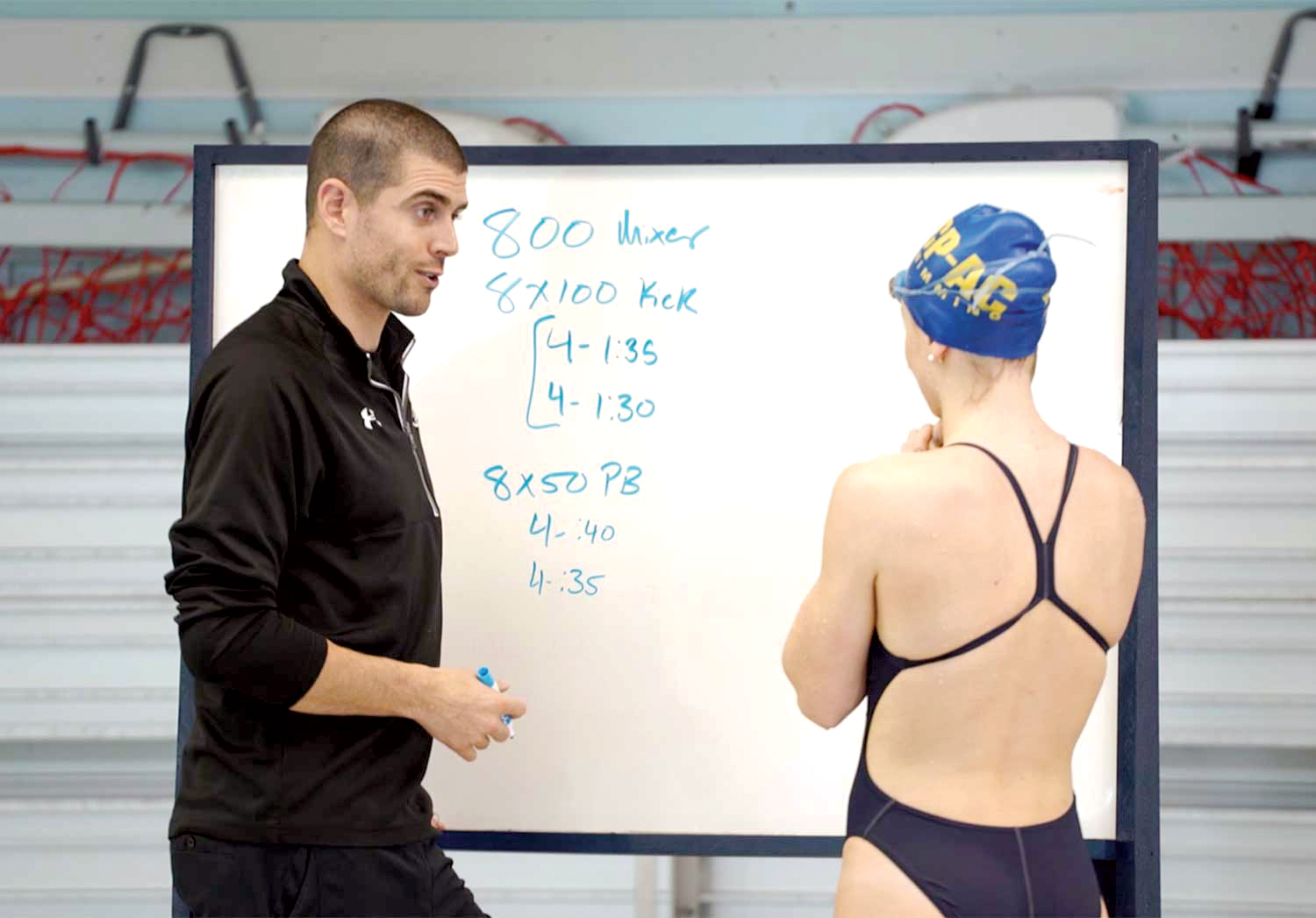 Coaching a Swimmer Through a Training Session 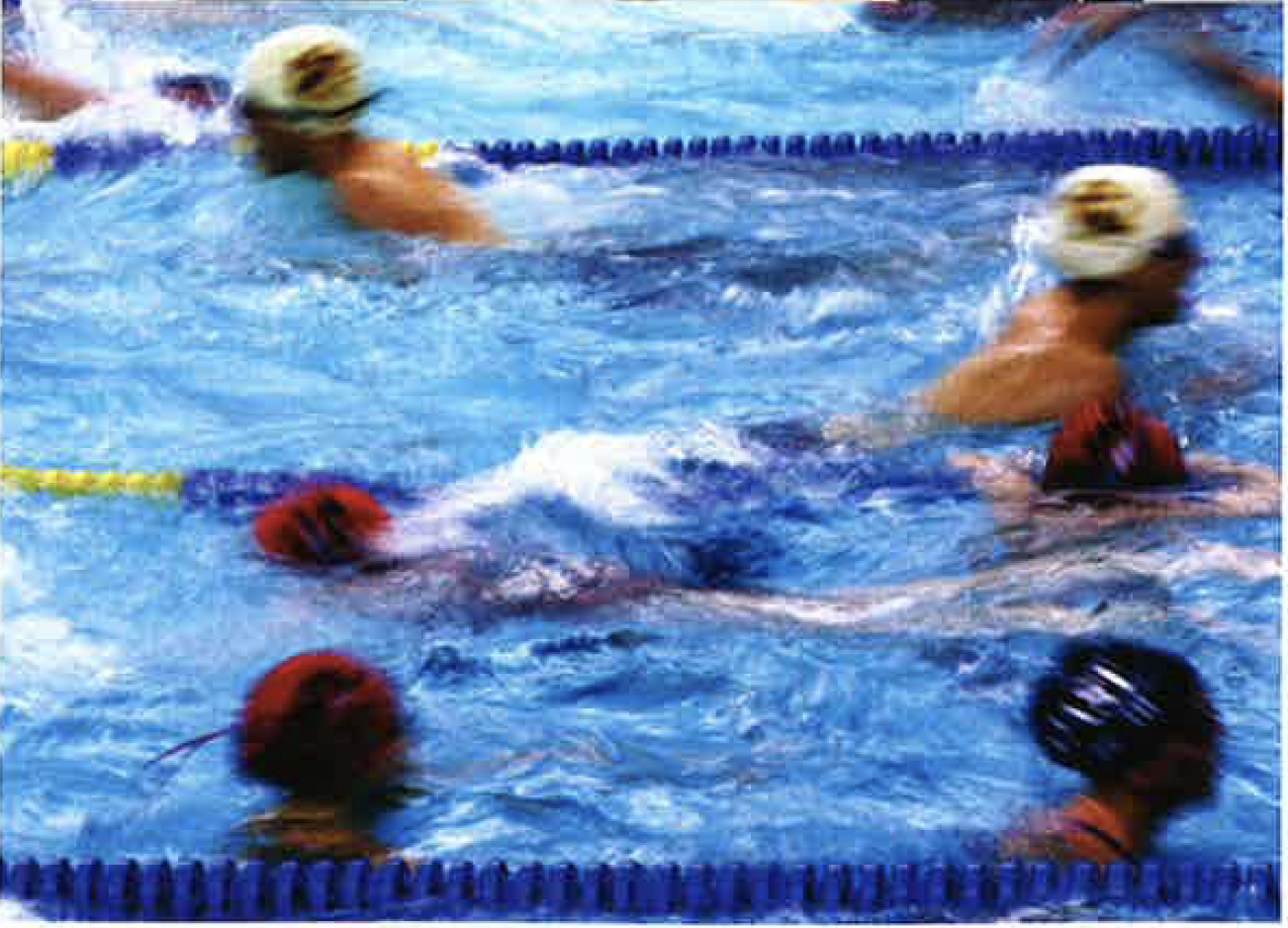