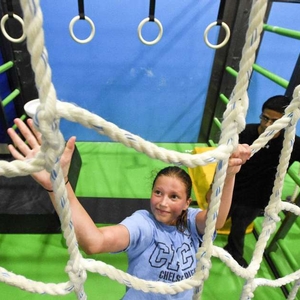 STAMFORD — What do you do for a child who’s favorite pastimes are climbing bookshelves and jumping off the top bunk of their beds? Teach them to harness and improve those skills by enrolling them in a parkour class.

That’s the advice of Phil Paolino, a head gymnastics coach at Chelsea Piers and a parkour participant (otherwise known as a traceur) and coach. Since the athletic facility began offering parkour about four years ago, it’s been their fastest growing program, due in part to the popularity of the sport in pop culture and shows like American Ninja Warrior.

“As far as organized sports go, parkour is still newer on the scene,” Paolino said. “It’s exercise. The kids, they love to run, they love to jump...we’re here to help them perform skills they already think are fun.”

According to Chelsea Piers, in 2014, there were about 50 parkour students during the fall and winter semesters. That’s grown to more than 150 each semester. Last summer, they began offering a parkour/ninja warrior summer camp, which grew from 76 students to 186 and counting this summer.

Marcos Rivera, head parkour coach at Chelsea Piers, said when he began four years ago, he had about 40 kids in the program. But through word of mouth, the program grew.

“When I first came, it was very small,” Rivera said. “In the past four years, we have had 140 kids in the fall semester. They feel like it’s a safe environment...When they first come, they aren’t aware of their body. After a while, they appreciate their body more. They thrive to get to the next level.”

Paolino got into gymnastics through parkour after an injury took him out of martial arts. He now helps coach some parkour classes at Chelsea Piers.

“It was a fun way to exercise without hurting myself,” Paolino said. “Parkour was the gateway for me to get into any physical fitness. It’s a great way to stay in shape. It’s the little kid in me.”

Parkour classes teach the basics of the sport at beginner, intermediate, advanced and elite levels, focused on learning to dodge obstacles. Ninja warrior is more structured, with specifically-designed obstacle courses.

But Paolino said interested parties should not confuse parkour with the style they may see on television.

“Parkour in pop culture is flashy,” he said. “It’s meant to look nice. There is a space for that in parkour, but parkour in its core is about getting from Point A to Point B in an efficient fashion.”

Rivera added there’s a different between parkour and free-running (a combination of running and gymnastics).

“Parkour should be able to help you catch the bus faster,” he said. “It’s natural human movement.”

At a recent class at Chelsea Piers, Rivera guided students through monkey walks: hopping on their hands and vaulting over cushy obstacles. Paolino said a sport like gymnastics is more about form, the goal with parkour is to clear obstacles, and teaching students the skills to do so - such as supporting their own weight and learning to fall - are two of the biggest lessons of the class.

After some time in the gymnastics room, the group tries out Chelsea Pier’s new equipment for the ninja warrior class, a black and plastic contraption with adjustable ropes, hanging rings, ladders and beams to create new courses for each class. Warm up involves climbing a black rubber “warped wall” propped at an angle before tackling the course.

Vickie Bergman, mom of Louise, 11, and Emmitt, 9, came at the end of class to catch the two siblings finish the course. Bergman said she’d heard of parkour, but didn’t get involved until Louise saw a class while doing gymnastics at Chelsea Piers about three years ago. After trying a few drop- in courses and watching some YouTube videos, she was hooked and the family has abandoned gymnastics in favor of the rapidly expanding sport.

“We come every week,” Bergman said. “They’ve both done things that are really hard and that they didn’t think they could. I can see how proud they are. When she did her first flip into the pit, she was thrilled. It’s amazing to watch them climb up walls and jump things. It’s awesome for any kid who wants to have fun and get stronger. I love it more than gymnastics. It focuses on individual strength.” 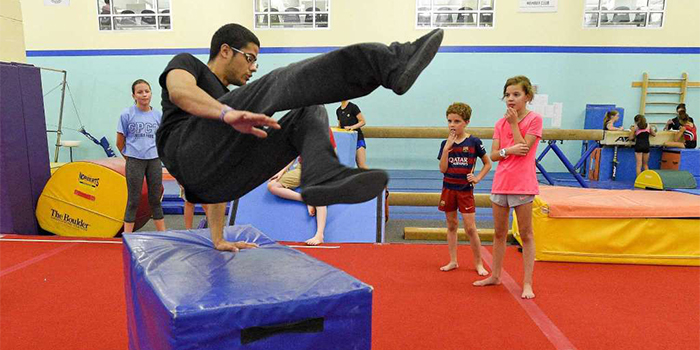 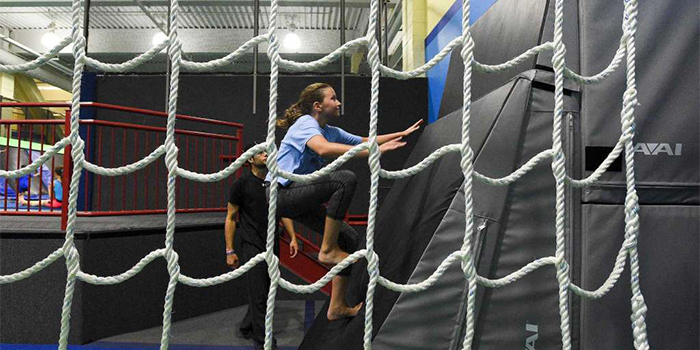 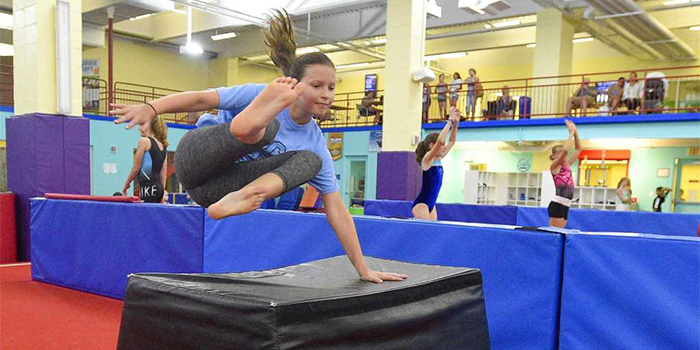