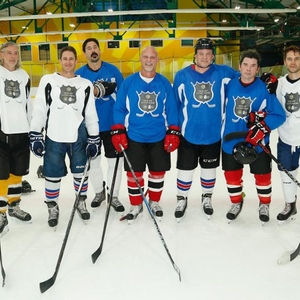 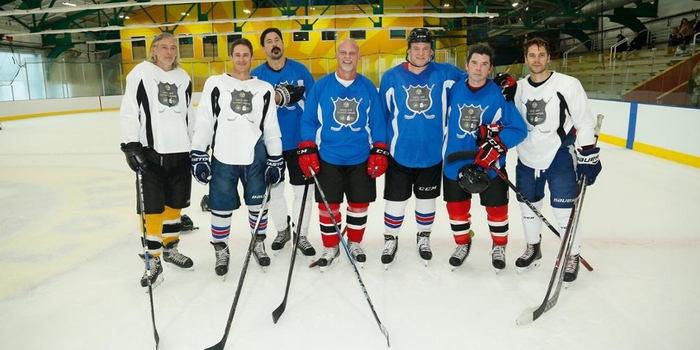 Joins other former NHL players, celebrities for Face Off to Fight Cancer

NEW YORK -- George Parros was willing to do whatever it took to play in the Face Off to Fight Cancer.

Parros was at the 2019 Tim Hortons NHL Heritage Classic in Regina, Saskatchewan, on Saturday. He hustled back after the Winnipeg Jets defeated the Calgary Flames 2-1, returning to New York at 5 a.m. ET, in time for the 1 p.m. puck drop.

"I did this event last year for the first time and found it very impactful," Parros said. "I committed right away to come back again this year, and it just so happened we had the outdoor game the night before. So I was very fortunate to be able to get out from the game and come here to get on the ice to make the extra effort to leave from Saskatchewan."

Parros joined former New Jersey Devils Sergei Brylin, Ken Daneyko and Reid Simpson on the NJPD side, which also included FBI members. Kitsch, who like Parros played last year, was on a team with Matisyahu and celebrity trainer Don Saladino on the NYPD side, which won 8-2.

"This was faster than last year," Kitsch said of the game's pace. "I just love that [the officers] compete. That brotherhood there, you feel it on the ice. They don't want to lose."

Parros and the New Jersey side led 2-0 after one period, but the NYPD roared back with eight unanswered goals, capped by Kitsch's third-period goal with two minutes left.

"We had a big intermission," Kitsch said. "Restructured the game plan."

Meagan Celeste, a beer-league hockey player, Devils fan, and daughter of a 25-year law-enforcement official, founded the event, and she organized it for the third straight year. The game was followed by a cocktail hour and dinner reception, attended by actors Sebastian Stan, Liev Schreiber and Liam Neeson. The event raised money and awareness for children battling cancer at Ronald McDonald House New York and the Don Monti Research Foundation.

"It means a lot for me," Celeste said. "To be in a room and have so many of my passions for a cause that is so dear to my heart, it's wonderful."

Kitsch, best known for his work on the TV shows "True Detective" and "Friday Night Lights," appreciated the opportunity to use his passion for hockey to help those in need.

"It's an amazing cause," Kitsch said. "You meet these kids and these families and see what they're going through, and anyway you can help in any way possible. I have a blast skating with these guys, and it's a great way to give back."